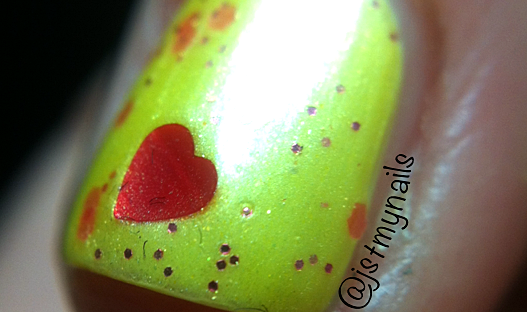 Hi there!! Today I have for you a pretty new indie line called Sue Me Lacquer. I had seen a dark blue jelly that she made that I loved so I contacted her about swatching!! Before I even start on the polish let me tell you how awful this winter has been to my hands!! I had one break making dessert for Thanksgiving and they haven’t stopped since!! Peeling, tearing, the works! Warm weather is on its way so hopefully we are done with all this because I have no nail left lol. I also have been playing with my lighting again. I just can not seem to get it to where I need it. I will get it though eventually… I have to, right?! So here are the polishes sent to me by Susan 🙂 I really liked them all!! The formula on a few were on the thick side but I have been assured that they are being reformulated as I type! And again please excuse my winter fingers! This polish is called Monkey Love. This polish is a  sheer yellow metallic with orange/coral hexes, red metallic and holographic micro glitters and red hearts. I used 2 coats over 2 coats of Sally Hansen Yellow Kitty. It really Made the yellow pop. I couldn’t get the best pictures of this. It reflected the light like you would not believe and I didn’t want to matte it because you would lose the shimmery finish!! The formula on this was one of the thick ones but a little thinner fixed it right up!! It was smooth and dried nicely. I did have to dab on some hearts but not all. I just left my bottle upside down for a few minutes before swatching. 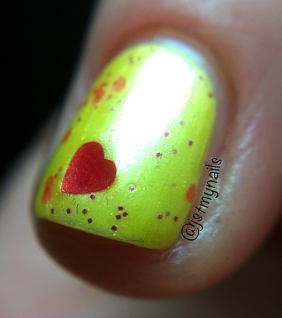 This one is called Bloody Valentine. This was also a thicker one but thinner fixes all!! Not really but it did fix this issue 🙂 BV is an awesome jelly polish. The squishiness is just to die for! It was a dream to work with as well. 3 smooth coats without undies. Its definitely darker than blood red but its a unique color to say the least. It a blackened reddish brown. Almost like a dried blood stain. Does that make sense? Either way I liked it more and more the longer I wore it. I did have to fish a little for the heart but hey, its a pretty big glitter. I haven’t come across a polish yet to have perfectly floating hearts!!! Besides the fact that it has red hearts and black holo hearts! It also has lots of red holographic microglitter. Which I totally love. It gives the dark polish a pop and flash of brightness. The dry time on this polish was amazing!! Probably the second fastest of any indie I have tried! I only used my seche vite topcoat to add a little extra shine. 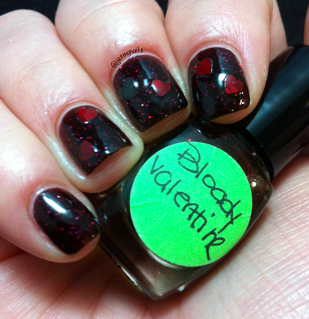 Forever Alone is a black crème polish with scattered holo glitters. No matter what I did I could not capture any holo. Mostly to the fault of New England weather. Being on a third shift schedule and hardly seeing the sun doesn’t help either. nut I did get a good bottle shot of the holo for you so you could see just how beautiful FA really is. This really could be a one coater but I used 2 coats because it didn’t dry completely smooth and I wasn’t sure if it were the polish or user error. Its not bumpy or anything but you can definitely feel the texture of the glitter. you can actually see it under my top coat. Which was weird because after the top coat it was like glass! Without topcoat it also dried to a waxy, semi-matte finish.

Like they say, save the best for last!!! Ruby Kisses is a cranberry colored sheer jelly jam packed with holo goodness. This is a pretty colored version of china glaze fairy dust in my opinion. This one needed no thinning. I used 4 thin coats of perfection. I can not say enough about this polish. I have already made plans to buy this in a full size. Its so versatile. its sheer enough to layer over almost anything. I just love it on its own though! Its just super beautiful!!! Make sure to check out Sue’s store for these polishes as well as others!! It will be worth it!! 🙂 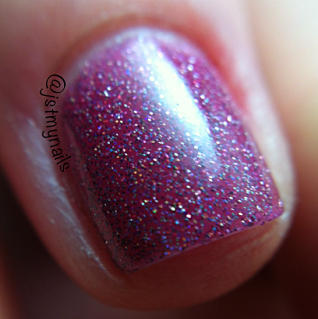 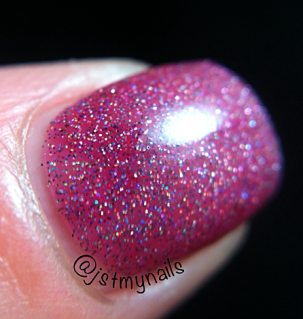 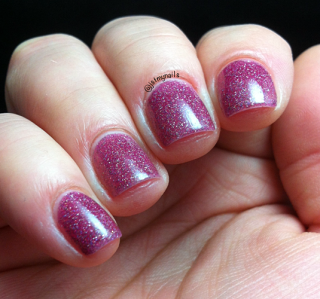 I am a very quirky, fun, easy going person! I have 2 daughters, a son, and an amazing husband. I am a nail polish addict/hoarder/lover/swatcher/reviewer. I do reviews of all types but mostly polish :) View all posts by Caffeinated Cuticles